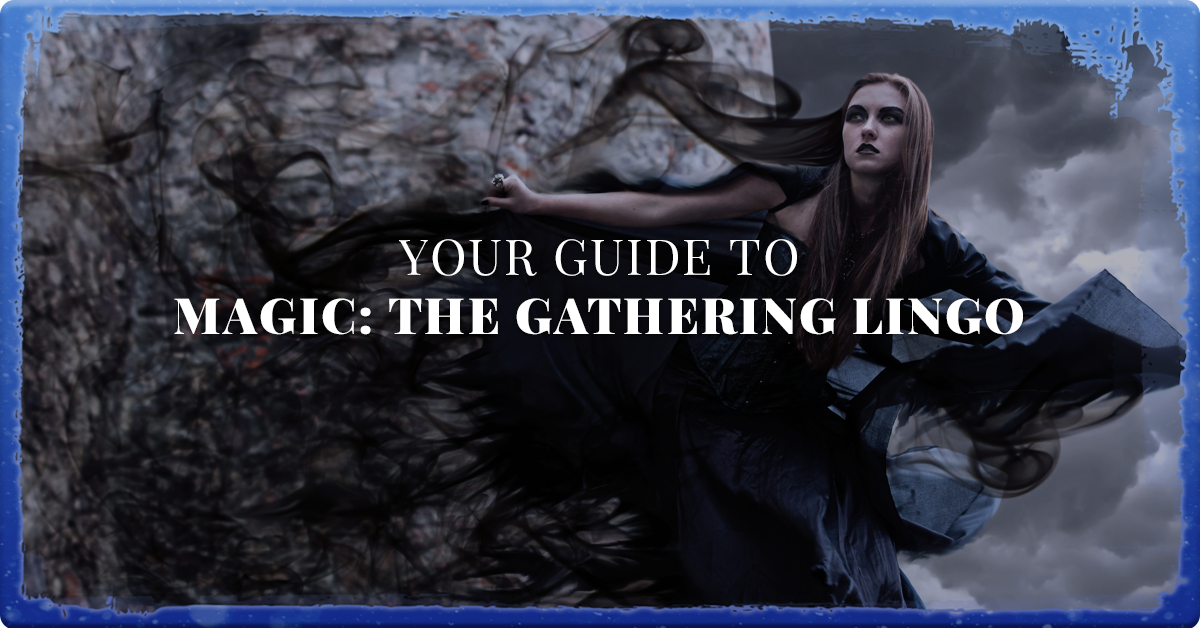 Like most subcultures, Magic: The Gathering is filled with terms that apply only to the game. It can make an outsider feel excluded when they aren’t familiar with all of the terms players are using during gameplay. It’s a good idea to get to know some of this terminology so you can keep up with the table talk. Here are some of the most common terms you’ll hear and their definitions.

This is an abbreviation for Magic: The Gathering.

These are the wizards fighting the battles within the MTG universe. Players might describe themselves as planeswalkers. There are also planeswalker cards and decks.

These are individual cards. Cards are originally sold in booster packs and boxes, but the individual cards that come from them and are then sold on the secondary market are referred to as singles.

To “tap” or “untap” a card is to indicate whether or not it’s been used. Tapping is usually indicated by turning the card 90 degrees so it’s on its side instead of straight up and down. Untapping would be indicated by moving it back to the original position.

This is a term that means a card is giving specific abilities to another type of card; it’s attaching itself to the card in some way. This is common with cards like Auras or when equipping a character with something.

Refers to an area on the board where cards may be placed. Cards in exile don’t have an effect on the game anymore.

This is a battle between two creatures.

Refers to organized MTG games that happen around the world. Tournaments help players achieve higher levels, where they can even reach Pro status. Many local game stores organize tournaments for players in the area.

These are the cards you are playing with during your battle. Decks consist of 60 cards and can be personalized by each player.

This is an abbreviation of aggressive. Aggro might be used to describe a certain type of gameplay style or a deck build that’s particularly aggressive.

This is a separate pile of cards, usually numbering fifteen, that are set aside from gameplay. After the first game, players might choose to tweak their deck with cards out of their sideboard to adjust their strategy.

This is the field of play, referring to all of the cards out on the table.

This stands for Converted Mana Cost. It’s the total cost of mana on a card, including the color-specific mana and the generic mana that’s needed to play the card.

This refers to one player having an advantage over another player based purely on the number of cards in their hand or deck.

This refers to the act of making one of your opponent's cards a dead card. You blanked it out.

There are really too many nicknames for individual cards to get into here; this article would never end if we launched into that discussion. If you hear a player refer to a card by a name you don’t know, chances are it’s simply a shortened form of the full name. For example, Mis-D is short for the card Misdirection and OwN is short for the card One with Nothing. Some of the card nicknames are pretty amusing, though. A favorite among a lot of players refers to the artwork on the Uktabi Orangutan card which appears to depict two monkeys very closely engaged with one another.

An Important Lesson About Lingo

Don’t let the use of MTG lingo hold you back from getting into the game. There might be a lot of terms used at the board that you aren’t familiar with, but don’t ever be afraid to ask. Asking for clarification (about the lingo or anything else happening with the game) is a good way to deepen your knowledge about the MTG multiverse. Most MTG players are more than happy to talk to you about definitions and terms, maybe even giving you more information than you ever really wanted. If you are too shy to ask, just hit the internet up for some knowledge. There are tons of comprehensive lingo guides that go way more in depth than we have above. The point is this: there is no reason that not knowing the lingo should hold you back. You can learn it quickly and be using it like a pro in no time!

Come Give All Your New Lingo a Try

Now that you are a little more familiar with some of the terms that you’ll hear commonly used around the table, come down to Dragon’s Lair and give them a try for yourself! You’ll find a friendly Magic playing community here seven nights a week. We aren’t just playing Magic, either. You’ll find D&D enthusiastic and board game fanatics, too, and there are usually people who are happy to invite you into their game. Of course, we also sell MTG singles, board games, and so much more. You can shop in our store or online!