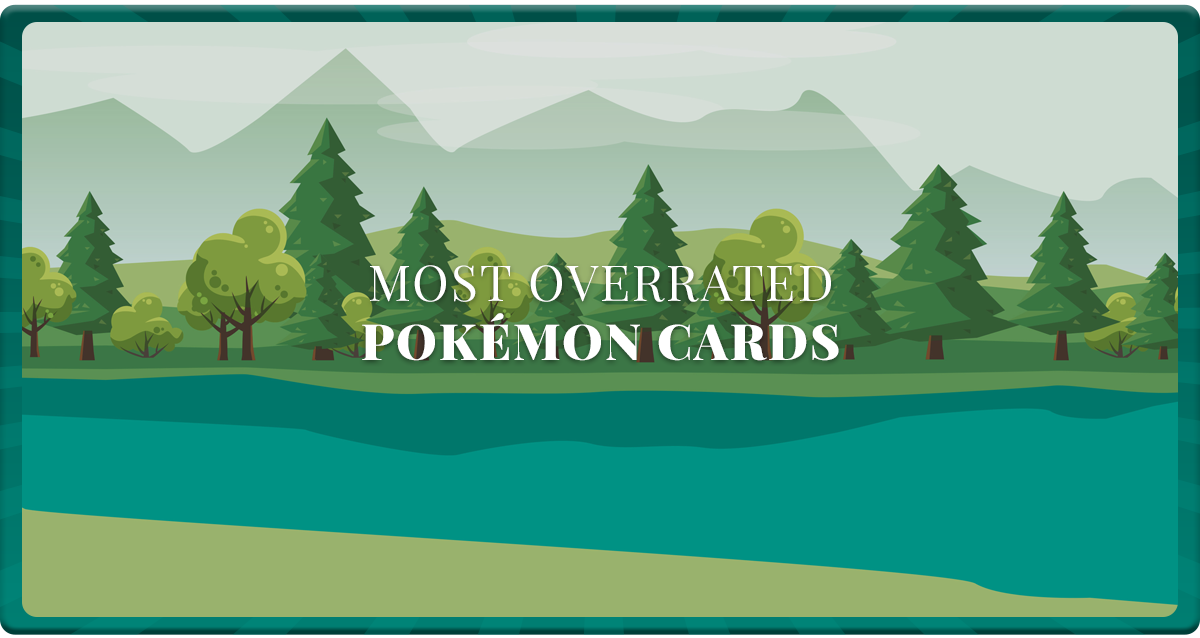 We know that this blog post is going to rub a few people the wrong way. Due to the overwhelming love of Pokémon all around the world, and more than 800 unique species, everyone has their favorites and will defend their honor until the end of time. So we’d like to begin by saying that this is not fact, only opinion. The term overrated has been a bit overused and we are not implying these characters are weak or useless. We only believe that some receive a bit more hype and attention while others don’t get any recognition for their skills and abilities.

At Dragon’s Lair, we’re proud to be your game shop of choice, and if one of your favorites is on the list we hope that you’re not too heartbroken and that you will forgive us. We’d like to reiterate that we love all of these creatures! So, without further ado, here is our list of what we believe to be the most overrated pocket monsters to date.

Known as “The Original One”, it is believed that Arceus created the Sinnoh region, and quite possibly the entire Pokémon world. So being the likely PokéGod, you would assume it be the most powerful and unbeatable character, right? This simply isn’t the case. While being able to be any type while holding a plate or type-specific Z-Crystal, there is a reason that you hardly ever see it on a competitive players team. We believe the reason behind his popularity is due to the fact that it is a deity, and while that is pretty cool, we hold firm in our opinion that he gets a little too much love and attention.

Greninja seems to be found everywhere. From being a playable character in Super Smash Bros, to getting its own form in the anime, Greninja quickly became one of the most popular Pokémon characters. We don’t know if it’s because of Game Freak’s admittedly stellar design (a ninja frog, what?!), or quite possibly due to Ash-Greninja, but we feel that its acclaim is a little bit much for what it is.

Okay, we have to admit, Eevee is pretty darn cute. With its bushy tail, its adorable pointed ears, and its resemblance to a loving family pet — we get it! We also know that it has eight different evolutions, but come on! Can we all just concede that the reason that the reason so many people are infatuated with Eevee is because of its off-the-charts cuteness level?

What? Pikachu?! Say it isn’t so! We feel like everyone can admit that Pikachu has become quite overrated in the Pokémon universe. Even those of us that claim him as their favorite, we all know that he’s been overused. Even people with only a cursory knowledge of Pokémon know about Pikachu. Similar to Eevee, part of this is because he’s adorable. After his appearance in the anime, he also became the clear mascot for the Pokéworld, mostly due to to being Ash’s main Pokémon. Originally depicted as a rare find, he is everywhere. It’s time to admit it even if you don’t want to — Pikachu is overrated.

You saw this coming, didn’t you? If you talk to any fan of Pokémon, they’ll claim Charizard as the most overrated even if they love him. After being the mascot for one of the first games, his sought after rare card, and his pretty awesome design in final form, Charizard became a favorite for many people. Most beginner players chose Charmander as their starter. This was likely due to the timing of his appearance, right in the beginning of the Pokémon craze. Listen, we like Charizard, but come on, any true fan can attest that his popularity has been extremely overblown.

Are you still with us? We know we’ve upset a few of you, but just know that that was never our intention! We believe that all Pokémon have unique abilities, designs, stories, and traits that anyone can love! We just also feel like a select few of them get a wee bit much attention when there are 800 other pocket monsters that many don’t even know about! Please forgive us if we’ve hurt your feelings, but again, this was just our opinion and of course you can have yours, too!

If you’re not too hurt, or if you agreed with our list, be sure to shop our game shop online now to get all of your Pokémon needs! We also have countless board games, Yu-Gi-Oh packs, and specialize in Magic the Gathering, so be sure to upgrade your deck for success with our MTG singles and booster packs. If you’re in Wallingford, CT, be sure to check out our calendar to see which of our upcoming events you would like to attend.